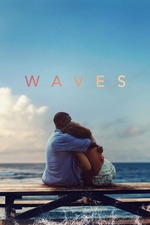 This won’t be a traditional review for the film, rather, it’s a thank you letter to the incredibly inspiring filmmaker behind it, Trey Edward Shults. I know he’ll never see this and I know Letterboxd isn’t the best place for this, but I have to get everything off my chest. Sometimes a film just absolutely hits you on a personal note and that’s the case with Waves.

Thank you for making this beautiful work of art that will stick with me forever. It’ll be the film I show my children, the film I hope will inspire them to better themselves like it’s done with me. The catharsis I felt while watching this is unparalleled to anything I’ve ever seen or done in my life. It’s the film that left my father, who’s a domineering father like Sterling K Brown’s character, in complete tears during the car ride home as he apologizes for everything he’s put me through. The constant pushing me to my limits, the lack of nurturing, the consistent absence from my childhood. Someone who I’ve always seen as a tough, unsympathetic person that just doesn’t understand me or my feelings is bawling and asking me for forgiveness after watching this film. He finally saw the effects of this toxic masculinity and was able to understand how this might hurt me to the point where I want to give up. My dad was able to see these highs and lows, the hardships and confused feelings teenagers feel because of your film. A father-son relationship can be so complicated. And the fact that I was able to see the complicated dynamics between a father and son on a big screen, portrayed in such a delicate and raw manner, is a true gift. Because like Tyler, life moves too fast and it’s incredibly difficult for me to process it when everything I thought I knew and loved comes crumbling down on me so quickly, suffocating me to the point where I feel worthless. Realizing that maybe I’m not alone in these feelings is comforting. I just know this film is going to have a huge impact on what the future holds between my father and I. I feel like our relationship will strengthen because of this film. Over time, our relationship will mend together again as we bond over the collective experience we had in the cinema watching your powerful film. Walking in, I never could’ve imagined how changed I’d be when walking out. I’m now ready for change; I’m ready to confront my anger, insecurities and anxieties. I hope others will be changed by this special film because there’s nothing better than understanding your feelings. I thank you, Trey, for this experience I’ll never forget. Your film has moved me to better myself, to love, and to meet my emotions head on. Thank you for making these stunning films that tell intimate yet universal stories. And thank you for inspiring me to tell my own stories, so that I can deeply affect others.

Sincerely,
A dear admirer of your work Jack