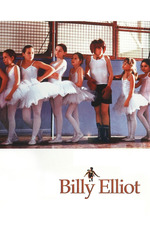 i fucking love this movie.

it has so many layers of emotion that aren't immediately visible but are crystal clear by the end of the film. you grow to care very deeply about each main character and understand them as people after seeing how they change throughout the movie (or in my interpretation, most of them are the same it is just that more and more of their "hidden" emotions begin to show through).

the soundtrack for this film is amazing and while they may not be songs that i would listen to on my ipod in my day to day life, each one fits their respective scene incredibly well.

this movie has so many creative sequences that express billy's emotions, like how his intense anger and frustration (normally very negative and heavy emotions) are expressed as a fierceful tap dance on the rooftops, the streets, and the bathroom with a funky, cheerful soundtrack in the background.

all the dances are so well choreographed too and the way that billy dances isn't perfect, but that's a good thing because it somehow mixes awkward clumsiness with great choreography to portray the dance as extremely natural and realistic while also showing off some amazing choreography. it's kind of hard to explain, you can tell that his movements aren't exactly perfect and you might even think that he's not that good at some points but he pulls it off in a way that is ultimately captivating and engaging, proving that he is in fact an amazing dancer. his dance has personality instead of following formulas or "perfect" angles and i guess that's what his ballet teacher saw in him.

the transitions are smooth as fuck. one moment it's a fun, goofy dance sequence to some funky 90's vibes that shows how much fun billy is having while learning ballet and then half a second later it's an extremely intense scene with the family that shows the reality of what they're going through and the stress that they suffer, and this transition is so natural there is nothing jarring about the abrupt change in atmosphere. there are scenes that skip ahead months from spring to christmas and the use of panning and other techniques to show that transition is so seamless. there's one scene that bamboozled me into thinking it was a natural transition into a flashback but it wasn't. in one scene the transition skips like 15 years and you don't even notice for like half a minute.

there are so many themes and underlying motifs that cover everything from family, self-identity / gender identity, homosexuality, poverty, accepting people for who they are, sacrifice, giving up your pride to support someone you love, and more, on several different levels, some on the surface, some never explicitly mentioned.

the dialogue is written in such a way that a character may be saying one thing or doing one thing but have completely different "true" feelings about something. there are scenes that show that while a character might do something and may not seem to care, he actually cares deeply but simply had no choice given the circumstances he is in.

there are scenes that show an intense conflict of love vs. everything you've been working for and scenes that place a character in the "other side's" shoes. the whole police vs. miner's strike thing was such a nice subplot that really helped expose some of those "true feelings" and push character development.

low key i'm glad that i had subtitles for this movie cus their accent made it essentially a foreign language film for me though i might just be stupid as fuck and can't speak english, but i think their way of speaking (slangs, different intonations, different vocab, etc.) only added to my enjoyment of the film. though i found it a bit bizarre at first because it's a dialect i'm not very used to, i quickly grew accustomed to it and quite liked it. i also realized it even served to illustrate another aspect of their circumstances (especially when compared to the standard london accent we hear later in the film). i think.

you can genuinely feel the characters' emotions whenever they are ecstatic and having a lot of fun, or anxious and scared, or extremely proud or angry or sad or misunderstood. the acting was quite amazing but that mixed with the incredible piano soundtracks in this film + the filmography in general really lets you feel (not just see) transparently exactly what a character is feeling in certain situations.

and last but not least the ending is very complex as well. it's simultaneously such a happy ending yet also a very sad one. because of the multiple layers of themes, "hidden" emotions and their respective "true" feelings, and the subplots that occur throughout the film, there is a tint of sadness and things not happening the way the characters hoped they would. but that only adds to the realism of the movie cus tbh life is kind of a dick and that's just how things are sometimes. even though something just happened that made you so happy you run through the streets to share it with everyone, another aspect of your life can leave you feeling completely hopeless. and though you may have a happy ending, it's not always a fairytale.

also, i concede at this point that i'm a dumbfuck, but for the longest time before watching this movie i thought billy elliot was tom holland.

i mean, they kind of look alike, right?